I decided to try a hitch carrier.

It works well aside from my truck being a bit low so I have to be careful around inclines.

I made a light bar with a plate relocate to avoid any hassle from police. 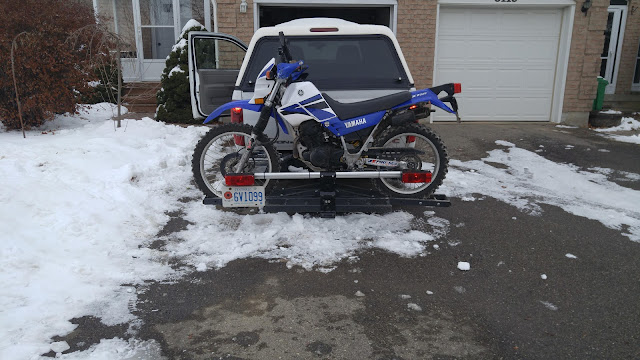 New ride (to me), winter riding. 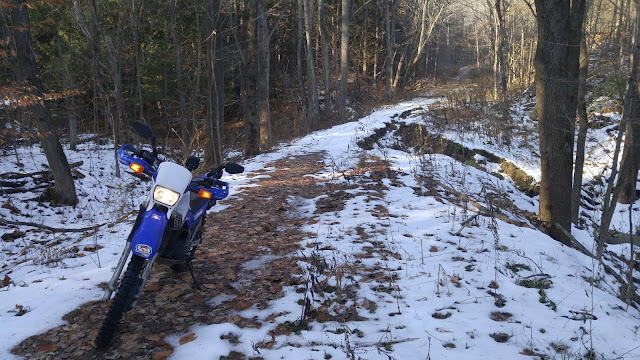 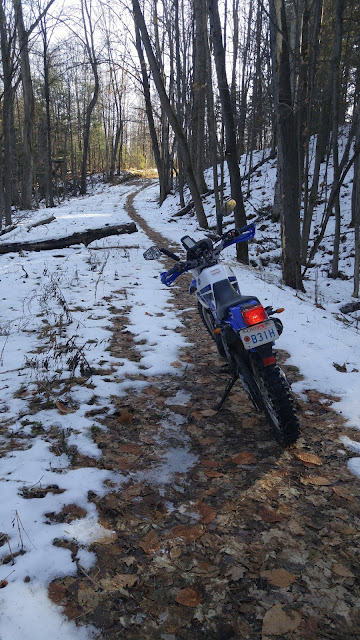 I just bought a Yuasa YT7B-BS for my DRZ, and ordered from saskbattery.com as I've ordered from them before and they have had the cheapest prices.

Every time I ordered a Yuasa before, it came uncharged with the acid separate; which is great because that way you know it wasn't sitting.

This battery came in a generic box, stuffed with newspaper, and pre-charged. I complained to saskbattery and yuasa as it appears refurbished to me, and I have no idea how long it has been charged and sitting.

They claim they repackage batteries to avoid theft -- so I had to ask, why not just put the factory box in a slightly larger generic box so you can still maintain the new-in-box integrity of the item? Crickets...

Anyway, just a short rant to state I will be avoiding saskbattery.com and sticking with a more reputable dealer. 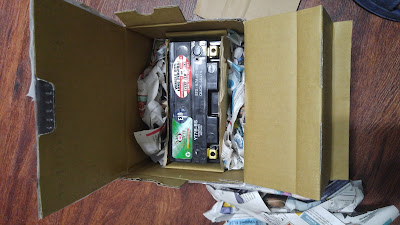 The only resolution to this problem that was offered was that saskbattery.com said I could return this for a full refund but the shipping would be on me. I disagree with this solution. I ordered a new battery, I did not order the wrong item and did not change my mind. Why should I be penalized (paying the cost of the return shipping) for a mistake that was not mine?

Since Saskbattery would not help me, I turned to Paypal. Paypal's resolution was exactly the same. Send it back on my dime, get a full refund. Still unacceptable. I tried escalating the case but it was denied and closed. So I have closed my Paypal account.

Finally, I phone Costco Capital One Mastercard to see if they could help. Because Saskbattery.com is offering a full refund, nothing they can do either.

So the end result is that I got shafted with a used or refurbished battery with no recourse other than paying to ship it back. This taught me an important lesson about buying locally if possible so you can see before you buy, otherwise only shop with companies who have decent return policies like Costco or Amazon.
Posted by Gonzo at 2:22 PM No comments:

The Lake of Bays ATV club recently announced that they have groomed ATV trails available for winter riding, and since I happen to be a Lake of Bays/Hatva permit holder at least until May 2019, I decided to try it out.

The ride there was almost eventful... there is a layer of ice in the back of my truck so my ATV rides higher than normal. The roads that google maps lead me down were rougher than normal and I took them a bit aggressively so my ATV got some bounce.

As a result, I came very close to breaking my rear window... the hook from my winch bounced around more than usual and ended up denting my cab about an inch below the window. Lucky. So I rode the trails, and groomed winter trails are fast. No rocks sticking out, no mud holes, I made great time. 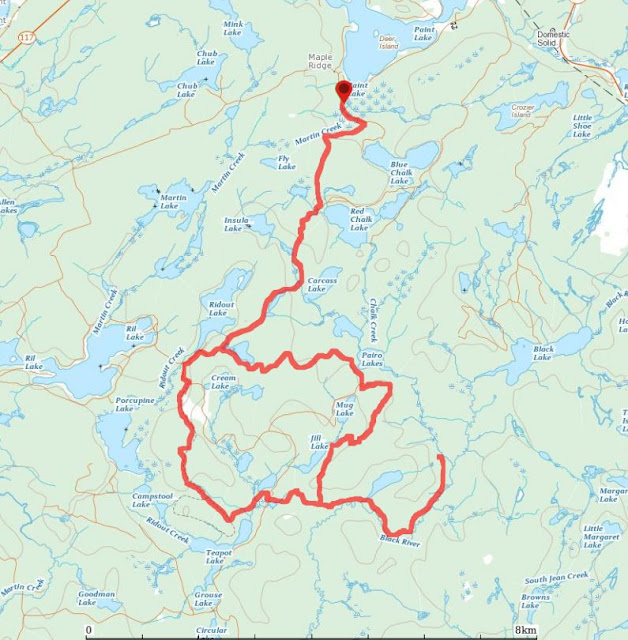 There were a few open water spots due to running water, these are the only pictures I took: 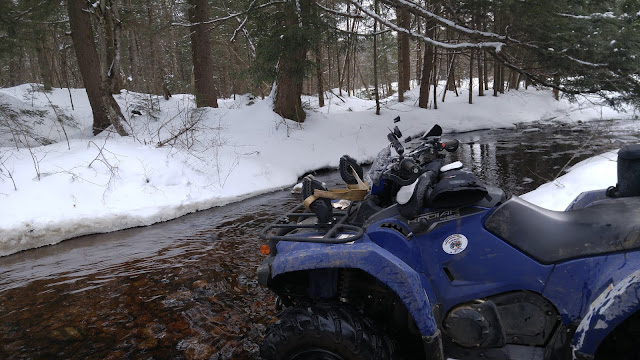 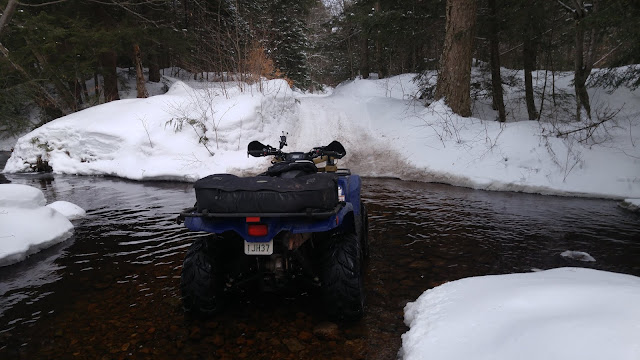 However a problem came up a few minutes after these pictures were taken.

I had pulled over on the side of the trail to check my GPS. I'm not sure why I pulled over, since I didn't see anyone else out riding so there was no one to block, however out of habit I pulled to the side. And got stuck.

No worries, or so I thought, I have a winch. Frozen solid. Could not even move the clutch to release the line. Pressing the button did nothing, I would have burnt it out.

So I carry a shovel

, and tried to dig myself out. Pointless, my skid plate was on the snow, and the snow was hard packed. I would have been there hours digging.

I also carry 100' feet of rope and a rope puller

(like a come-along, but it feeds rope through). So using that I pulled my ATV around from the back and with tension on the line was able to back out of the hole I was in and keep moving.

It was a bit of a scary situation though... more than 20km from my truck or any civilization, no one riding the trails, alone, in the winter. I'm going to have to be more careful under circumstances like these; I could have been stranded. It all worked out though, and was a great day of winter riding.
Posted by Gonzo at 2:16 AM No comments: